(Source: CSNNE.com) – “We’re doing everything we possibly can. He had a very difficult decision (about turning pro) right after his season was over. I think it was overwhelming for him. He’s at the World Championships now. His camp has told Don that he’s going to make a decision whether or not to return to college hockey or turn pro after the World Championships at some point,” said Neely. “Our hopes are that he sees where we’re at as a team and some of the young players we’re putting in our lineup. We hope that he understands that he’s a player that we think very highly of that can step in and contribute [in the NHL].”

Well, well, well, what do we have here? Looks like a punchers chance of you ask me. And that’s all you can ask for. Let’s hope Charlie McAvoy will be making a hell of a sales pitch to Anders Bjork over in Europe as his USA teammate at the World Championships.

This would be a pretty big get for the Bruins if Bjork decides to forego his senior season at Notre Dame and join them this fall. Not that it makes the Bruins legit Stanley Cup contenders or anything but it fills a huge need in house. It gives them a young, affordable, two-way forward on an entry-level deal that could actually slot in on a top-6 wing role with David Krejci and do some work. And the kid ready to make the jump and do work.

A couple weeks ago I would have said Bjork is going back to Notre Dame. Hell, our own Boston Pucks blogger Nick recently wrote about the lure of playing at Notre Dame and how all their draft picks have stayed put so far. But I think this development is a good sign for the Bruins. It gives Bjork not only distance from the recent heartbreaking finish to his college season but also a taste of playing with NHLers while he debates his future. The sting of a Frozen Four loss is easier to deal with when Charlie McAvoy is feeding you perfect seam passes and hyping Boston over beers after the game. It feels like home already.

I’m not going to make a prediction about Bjork’s decision though because I’d hate to be right again. So I’ll just say that I think there’s now at least a 60% chance he signs with the Bruins. And that’s just enough for me to order my Bjork jersey now. 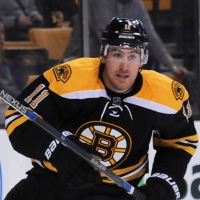