Hey now! How you doing over there Providence?! Not to shabby if I do say so myself.

Our beloved Baby B’s came back from down 3-2 in a series for the second straight round to win road Game’s 6 and 7 to advance. Last night it happened in Hershey, home of the home of the Kiss. Where I come from winning four straight elimination games is known as being pretty good.

Providence was well in control of this one too. Other than a bizarre penalty call on McIntyre in the second period that led to a Hershey power play goal, the Bruins held the momentum and the lead the entire game. McIntyre was called for delay of game for catching the puck too far from the crease and not playing it and it appeared as though it took awhile for people to realize what had happened. However the officials made it clear they were just in league mandated training for eventually calling similar horseshit in an NHL game someday.

Providence will kick off the Eastern Conference Final at home on Friday night against the Syracuse Crunch who are led by Erik Condra, Matt Peca, and Cory Conacher. They also have resident clown Jake Dotchin, the player Brad Marchand speared in the bean bag against Tampa near the end of this season.

You can also add another team associated with Washington D.C. to the list of second round playoff failures this year. Hershey is the Capital’s AHL affiliate. 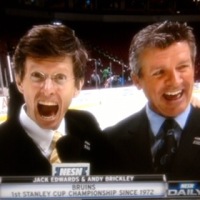